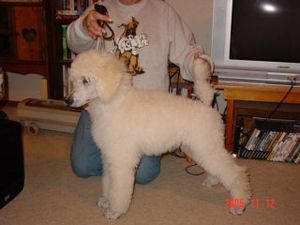 Sometimes, people waiting for a puppy from a litter, are confused about how the puppy evaluations and subsequent puppy selection and placement works.  Particularly there is confusion over how a breeder comes to a decision about which puppy will go to which family and/or the availability of pet puppies for pet homes. I would like to try and explain this process as clearly and straight forward as possible. 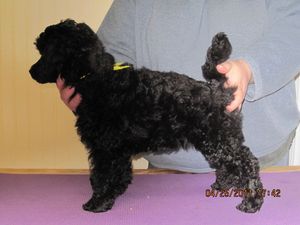 First I feel I should explain what the terms show puppy (or show prospect) and pet puppy (or companion puppy) mean. A show puppy is one that has been evaluated as being a good show prospect. A pet puppy is one that for one reason or another, has been evaluated as being not a show prospect but a good candidate for a pet home. Most people would be surprised to learn that in a well bred, quality litter there is often very little difference between the two and that if there are any differences, often times these are not physical ones that can be seen but are rather attitude/personality differences. If there are minor physical differences between a show puppy and a pet puppy, many times these differences would only be seen or noticed by the most educated and practiced eye and would go unnoticed by the general public-they in no way effect the quality or lovability of your pet. Some of these physical differences would include tail set , tail carriage, coat texture, eye shape, size and color, ear set, amount of angulation in the rear legs, the angle of the shoulder, the shape of the feet, length of the puppies back in relation to the length of its legs, spring of rib etc. Again, all of these physical characteristics have no bearing on whether a puppy would make a great pet (companion puppy) but they are considerations when assessing a puppies show potential or lack there of. 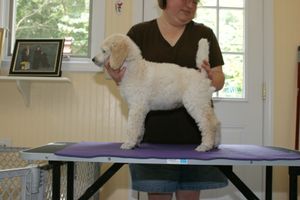 All purebred breeds of dogs have a written ‘Breed Standard’ that states what is considered the ideal for that breed. All the above mentioned physical characteristics are included in these written Breed Standards in great detail. Certain characteristics are given more importance/priority than others. Some physical characteristics are so important in a breed that the lack of them results in a dog being ‘disqualified’ meaning it would be unable to compete in conformation events (Dog Shows). Many of these disqualifying characteristics are completely cosmetic, such as unacceptable markings on the coat (the Poodle breed must be of a solid color with no white markings) and would not make the puppy unsuitable as a pet but would obviously make them unsuitable as a show prospect. 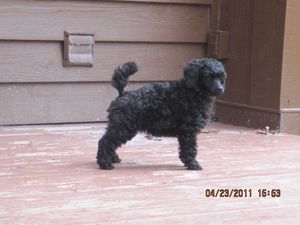 Whether a puppy is destined for a show home or for a pet home, the puppy should be sound of body and mind, healthy and possess a good temperament. Without these things, a puppy will not thrive in either a show or pet environment. A well bred litter is arrived at after significant consideration, research and thought so that each puppy in that litter is a valued member of the litter (and breed) no matter whether it’s going to be shown or is going to becomes someone’s pet. Sometimes people make the mistake of assuming that once a breeder picks out the show potential puppies in the litter, the puppies remaining are of lesser quality or are ‘seconds’. This is simply not the case. As mentioned above, there can be very minor differences between the show potential puppies and the pet puppies. Differences that in no way distract from a puppy being an excellent companion for a pet home. 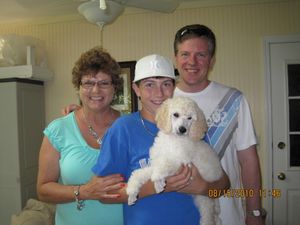 Sometimes there are more show potential puppies in a litter than show homes available and so a puppy that could do well in the show ring ends up going to a pet home instead. This is quite common and the main objective of any breeder should be to have all their puppies go to wonderful homes whether those new homes plan to show their puppy or not. Having said that, generally a breeder will breed and whelp a litter of puppies because he/she wants to maintain and continue the excellence of their dogs specific bloodline, for show and future breeding-and to enhance the breed as a whole. As breeding dogs age, they are retired from a breeders breeding program and new , younger individual’s need to be introduced . Therefore it’s essential that a breeder occasionally keep suitable pups for themselves. Breeders should always be working towards improving the breed by making wise breeding decisions based on that goal. When done properly and ethically ,planning ,whelping and raising a litter is a lot of hard work, research, time and responsibility….and of course joy! 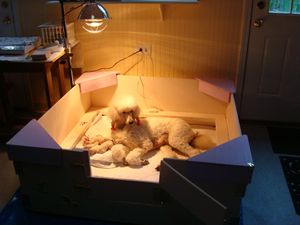 When a breeder plans a litter of puppies, they generally hope to have a least one puppy that they can keep that will be a good show/breeding candidate for the future (most times this will be a female but not always). Sometimes other people are interested in acquiring a puppy for show and/or breeding also. Again, as this is usually the main reason to breed, it’s gratifying to have others who are interested and willing to make the commitment of showing/promoting puppies from a litter. The breeders goal in placing puppies in show and/or breeding homes (and this is done very carefully and with strict contractual conditions in place to protect the puppies , the breeders bloodline and the breed as a whole) is to see some of their puppies go off and be good representatives of their specific breeding program in the show ring and make a positive impact on the breed by being used in someone else’s breeding program. 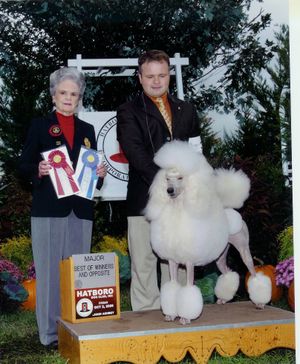 For this reason, a breeder may choose to sell a show potential puppy to a show home rather than a waiting pet home . If a breeder has made their selection of a puppy from a litter and there are other show/breeding potential puppies in that litter, they are more likely to let that puppy go to an available show home over a pet home all other things being equal. This can sometimes mean that a waiting pet home may have to wait for a later litter to get their puppy.  The puppy evaluations are generally done at 7 to 8 weeks of age. During this evaluation process , each puppy is placed on a table and the breeder goes over every inch of that puppy. They are looking at all the physical characteristics mentioned earlier and more. A breeder will also want to watch the puppies on the ground, to see how they move, see how they carry themselves and to look for that special certain ‘attitude’. 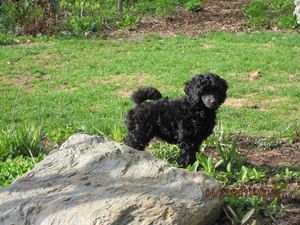 A show puppy should have a lot of attitude , very self assured with a ‘look at me’ quality.  Without that confidence and attitude, it does not matter how perfectly put together they are, they will most likely not make the best show dog. All the puppies in a litter should be confident and sound of mind but the show puppy will have that certain extra almost ‘cocky’ attitude. These individuals can often not be the best choices for a pet home as they tend to be more high energy and sometimes stubborn and require a more experienced owner. 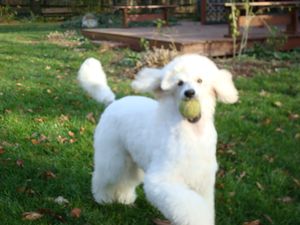 A breeder will first make their personal pick to keep and then if there are any waiting show homes, the puppies that are destined for those homes are selected. From the remaining puppies, a breeder will look at the individual personalities, energy level etc and match the expectations/desires of awaiting pet families to the individual puppy, trying to fulfill the puppy buyers expectations and give each puppy the best possible ‘forever’ home.

Can I Pick Out My Own Puppy?